A decline in quality of a TV show isn’t rare, but when it happens to what was once among your favorites, it still stings a bit.

Following the nearly-four month writer’s strike (Nov. 2007 – Feb. 2008) when Hollywood came to a grinding halt, the FX show Rescue Me went against the grain of their traditional 13-episode seasons (a formula that most FX shows have worked to perfection) with a marathon 22-episode year in 2009.

Once upon a time, that wouldn’t have been a problem. But in today’s quicker, faster, less commitment culture, it was a mistake — intensified because the season just wasn’t that good.

Mercifully, it was announced that Denis Leary’s latest gift to the world would come to an end this summer with one final run, not coincidentally closing it out on the same week we recognize the 10th anniversary of 9/11.

Through the season’s first four episodes, that decision has looked the like the right as the show has stayed in the same sad muck it’s been in since “the long season” with one standout performance we’ll get to in a few paragraphs.

The characters have simply become unlikable and nearly impossible to root for. If you really think about it, that’s an important aspect of TV dramas. Everyone loves a rooting interest, someone they can either identify with or admire for doing things they would never do.

Halfway through the final season, Leary’s Tommy Gavin character is back on the sober train but the back/forth of this storyline has worn out over seven seasons. There’s nothing else interesting about the struggle — it just is. His family has no redeeming value and are all people you simply want to shut up, especially his kids.

Even Lenny Clarke, who plays Gavin’s Uncle Teddy, is just kinda there — a former funnyman made sad and bitter by his girlfriend’s drunk driving death, something he blames Tommy for. That storyline resulted in Teddy shooting Gavin in a cliffhanger moment to close out Season 5.

It was an incredible moment, but wasn’t fully carried out in Season 6. If I was shot by my uncle, I think I’d be pissed. However, this is the Gavin family so we’re to expect something different. The two simply carry on as if it wasn’t a big deal, missing an awesome collection of stories to be told.

And then there’s the fire house.

The once lovable Lou’s health issues helped cause Gavin’s nephew Damien to be paralyzed in a fire, the same issues he’s still struggling with but refuses to address. However, his role in Damien’s accident was reduced to one small admittance in a throwaway scene this season, yet another example of a storyline that could have been played out fully. I used to love Lou, but that drives me crazy watching him now.

Shawn, Black Shawn and Mikey are the same characters they were when they started: shallow and without depth. Updates on what we’re looking at this season: Shawn is currently dating a girl that farts after they have sex. Black Shawn is about to marry Tommy’s annoying daughter (also battling a booze issue). Mikey is not gay, but acts as if he is.

And there’s Franco who is, well, Franco. He wants more responsibilities at the house and is going to get them. But what about his daughter that he let leave with cougar Alicia (played by Susan Sarandon)? Does he simply not care? Will she ever return? Should we even ask?

The decline has been ugly and tough to watch, but as someone that has seen every episode, I feel a personal responsibility to play out the string and see how they wrap the story. Our company used to do with the fantastic Leary Firefighters Foundation, which I believe in 100% and you should too. That’s why it’s been so difficult to experience this dropoff play out.

Over a year ago, I predicted some kind of twist ending where it turns out all of the characters were dead or something (think the ending of LOST, etc) as there’s no way all of these bad things would just keep happening without some sort of awakening to pull them out of the rut.

But no. Things just keep getting worse and worse with no validation for the few sunny moments. Why get excited when there’s another rainstorm coming? 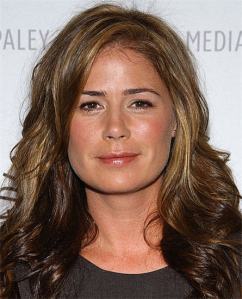 But there’s been one very great beam of light through the clouds this season: Maura Tierney.

Tierney revived her role as Kelly McPhee, an ex-Gavin love interest who we all know is the right one for him: the right mix of hotness, sarcasm and broken past all wrapped up in a great package. The viewer knows this. She knows it. Gavin knows it. But because any semblance of sanity is absent from Rescue Me, they remain apart.

In the summer of 2009, Tierney was diagnosed with breast cancer and in true great actress form, used that as part of Kelly’s return story this season. This season, she and Gavin bump into each other by chance in a pharmacy and her presence in two episodes has been a welcome relief.

Tierney is just so ridiculously good at acting like a real person that she deserves an Emmy nod with her peak moment coming in Episode 3 when she finally breaks down and breaks some stuff.

Without spoiling anything in that scene, Tierney so amazingly encompasses the rage of a recovering cancer patient still mentally fractured from the loss of her child while the man of her dreams she can never have stands in front of her that it compelled me to write this up. It’s quite something to behold.

In a short stint, she became that character you root for and that you like.

And to her credit, she made the part of ‘recovering cancer patient’ sexy. The picture at the top of this piece doesn’t do her justice. Go find the shows on OnDemand and you’ll see what I’m saying.

There have been some great moments over the history of Rescue Me with plenty of gripping cliffhangers and must-see performances (Michael J. Fox, anyone?) It’s frustrating how things have devolved in the past three seasons, but Tierney’s role as Kelly will always stand out to me.

There are four episodes left this season and there’s still time for a comeback, an opportunity to rescue the legacy of the show. Let’s hope the fire truck arrives just in time.